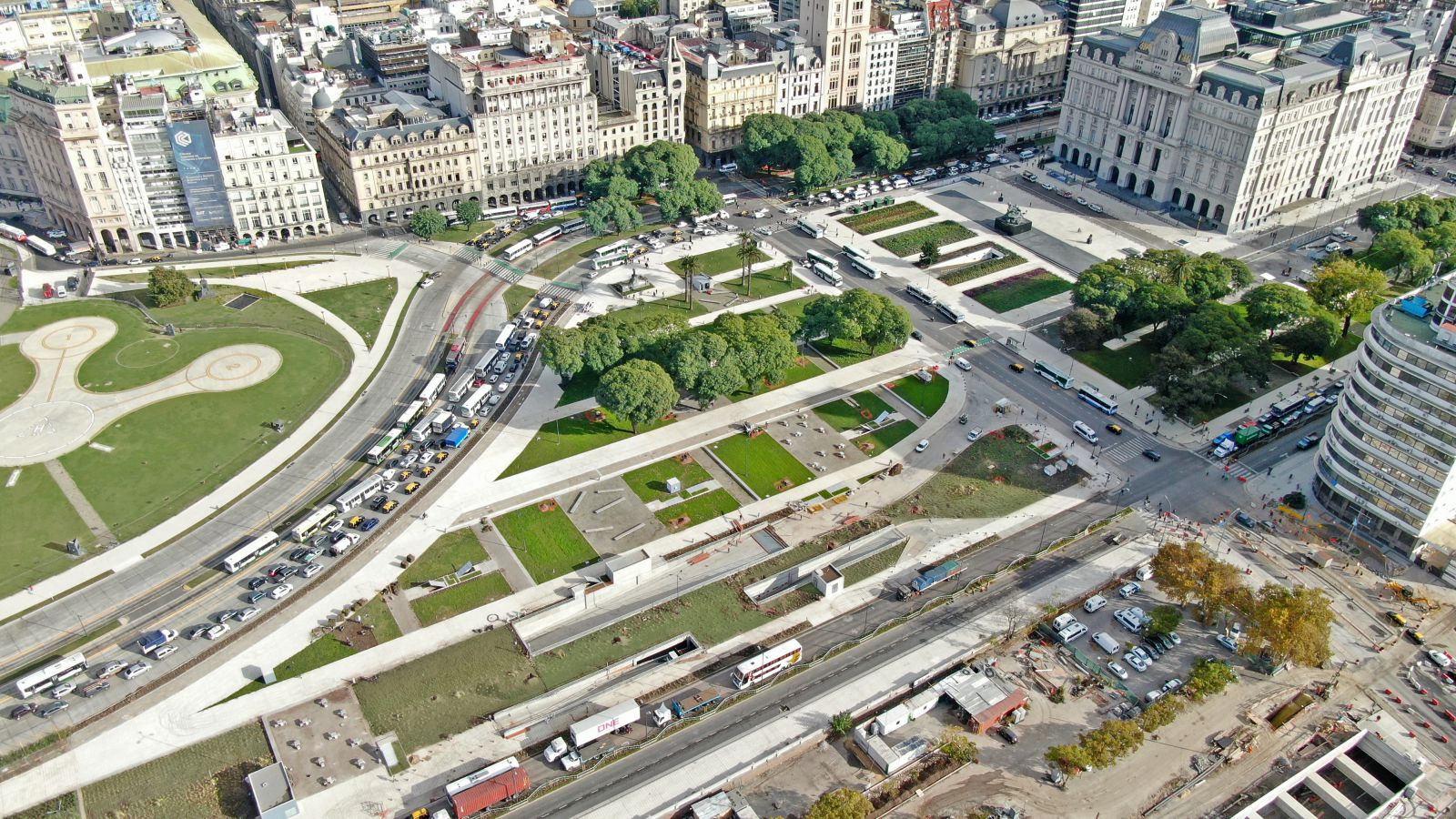 Grupo Silat is an engineering company specialised in the management and execution of thermal insulation, waterproofing and surface treatment projects that collaborates regularly with Tecnopol in Argentina. Of the jobs you have collaborated on together, which would you highlight?

Each job has its own specific features, but if I have to mention one that set the tone for the relationship with Tecnopol and its head for Argentina, it was the Official Car Park of the Presidency of the Nation and the Bus Transfer Centre “Parque del Bajo” which is part of the “Paseo del Bajo” complex an iconic project and without doubt the most significant infrastructure work of the last 30 years in the City of Buenos Aires. The building is an underground car park that at street level is transformed into a park, the structure at level zero is a large 15,000 m2 slab with a small slope, on which a variety of different situations are created such as the transit of public vehicles, pedestrian traffic and green areas. The prominence of this work is due to two aspects. The first was the synergy between Tecnopol and Grupo Silat to achieve a change of specification, since the specifications did not stipulate polyurea as waterproofing and after months of joint work by the technical and commercial areas of Tecnopol and Grupo Silat, we managed to convince the construction company that the best technical solution for this project was polyurea. Then, with the construction company convinced, we had to convince the studio that was in charge of the project, and finally we had to get the approval of the authorities of the Government of the City of Buenos Aires for the specification change to take place. At that time in Argentina polyurea was not well known and there were some bad experiences involving badly applied polyurea due to using machines that were not suitable or because it was being applied in minimal thicknesses. Therefore, in order to get all of the permits, we carried out an enormous amount of work and yet we still had not started the work itself. And that is the other remarkable aspect; the work presented two great challenges, the first one was the limited work times, so we decided to get all the material on site from the beginning of the agreed time, which gave us the freedom to move forward as well as the certainty of being able to finish the waterproofing on time. The second was a technical issue to do with the structure itself, the movements that occurred in the joints between the different sections of the slab were very noticeable, much more than expected. Thus, we had to find a solution for these joints and there, once again, we had the support of the technical department of Tecnopol, and we designed a final solution that to date has not presented any problems.

The system worked so well (as it still does) that today when a customer has doubts about polyurea we take him to visit that work, obviously the polyurea can not be seen because it was buried under the concrete and soil, but the most important thing is that no leaks of any kind are observed.

From a technical perspective, is there any work that is especially interesting because of its complexity, volume or any anecdote that you would like to share with Tecno Magazine readers?

We recently finished the thermal insulation and waterproofing of the new Northlands School Auditorium in Olivos, in the Province of Buenos Aires. The Auditorium is a 1600 m2 building that consists of a series of walkable ramps with steep slopes as part of the structure of the auditorium and also act as a “green promenade”, topped by a large roof garden. The complexity of this work lay in the fact that the building occupies the entire plot and there were no suitable spaces for storing the building materials and carrying out the formwork. What was decided was to enable a space on which polyurea had previously been applied in order to resist the "mistreatment" to which it was subjected during the work.

Another interesting aspect of this work was that the studio in charge of project management had a very active role when it came to information and training regarding the properties of polyurea, its characteristics and its correct application, this training was carried out by the technical department of Tecnopol in conjunction with its sales manager in Argentina. The knowledge gained by the project management enabled their presence to be felt at the time of application, such control (even of the temperature and pressure in the hoses!) helped us to continue improving the application process and achieve the highest standards expected by the customer. In short, it was a complex job, but in the end I think we grew in terms of capability, especially on a technical level thanks to the demands of project management and the support of Tecnopol.

Polyurea has a prominent position among the waterproofing solutions on your company's website. Is it easy to explain its advantages and uses to specifiers?

Definitely yes. Currently in Argentina, a generation of architects and engineers are reaching decision-making positions and are eager to learn about new technologies. I believe that this willingness to get to know new materials together with an interest in making construction processes more efficient and sustainable, together with the extraordinary characteristics of polyurea make its diffusion and acceptance ever easier.

Have you noticed an uptick in building rehabilitation in Argentina as a result of the pandemic and the fact that people are spending more time in their homes?

Proper waterproofing and insulation are fundamental for the conservation and maintenance of building roofs. Do you think more work is necessary to better disseminate and educate owners regarding the maintenance possibilities available to them?

Owners often only see the cost of the work and not the benefits generated in terms of comfort and economy over the medium and especially the long term. For example, today in Argentina energy to heat or cool homes is remarkably cheap, so amortising good polyurethane foam insulation in roofs and walls (or in the case of installing hermetically sealed double glazed windows (DVH) in openings) takes place over an excessively long time, which discourages owners from making larger initial investments. The same goes for the issue of maintenance, it is difficult for the average home owner with no construction knowledge to measure the costs (and headaches) of poor waterproofing. This is why I think it is essential to educate professionals (architects and engineers) and thus disseminate this information among them as they have a closer relationship with customers. In general customers trust professionals, so if the professionals are convinced of the suitability for use of polyurea or polyurethane foam, they are the best people to communicate this to customers.