The district of Sants in the city of Barcelona underwent/suffered an important urban change because of the creation of the station Barcelona Sants. It is currently the second-largest railway station in Spain, with some thirty million passengers a year, a third of whom make long-distance journeys.

The successive improvement works since its inauguration in 1979, and the adaptation to high-speed trains, have progressively changed both the station and its urban environment; one of the most visible changes was produced by the burying in 2007 of the tracks that ran in a south-west direction with respect to the station, creating an insurmountable artificial barrier that crossed the neighbourhood.

In order to resolve the space as a whole, an enormous concrete block / box was built over the train tracks that divided the neighbourhood, giving rise to a large 800-metre-long landscaped pedestrian area. With this urban development, the neighbourhood has been organised internally, communicated and opened to the public use of the neighbours and the city in general.

The project includes the community use of the upper part by means of paved areas and green zones; while in the interior zone numerous passages coexist with complex canalizations and the passage of communications facilities.

In other words, the coverage action is used to grant pleasant spaces for daily use for the population and, at the same time, to optimise the urban communications that coexist at present.

As a constructive solution for waterproofing under the pavements, Tecnopol's tecnocoat system was chosen (made with pure polyurea Tecnocoat P-2049); with three objectives: to achieve a complete and safe watertightness of the concrete slab, to reduce the overall execution time and to make it possible to carry out subsequent civil works on the same polyurea membrane without the need for heavy protection, with maximum safety in terms of resistance to abrasion, punching and direct circulation.

Technical characteristics of the system

The substrate was prepared by milling/polishing the reinforced concrete with special intensive polishing equipment to give a visual finish to the "Concrete Surface Profile CSP-2" scale. This substrate preparation action, together with the application of a polyurethane resin as a primer-sealant, made easier the subsequent application of the polyurea membrane avoiding the appearance of pinholes or other pathologies, ensuring a good continuous adherence to the substrate. Hot spraying provides greater security to the watertightness of the whole as the control of the mixture of the two liquid products required is carried out through a fully digitalised mixing equipment, which controls the mixing ratios, temperatures and pressures suitable for its solid formation. 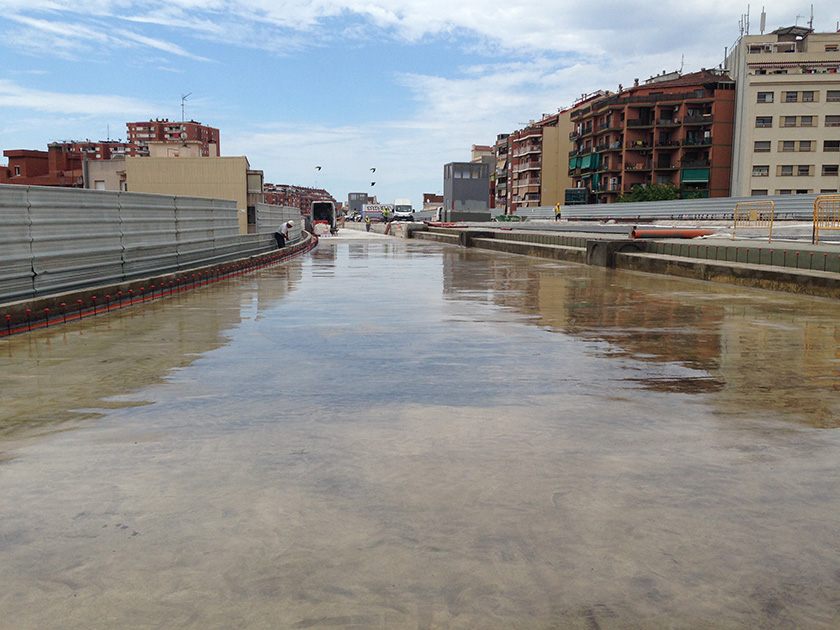 After pre-treatment of the surface, two intercrossed layers of 100% polyurethane resin "PRIMER PU-1050 solids" were applied; and then the "TECNOCOAT P-2049 pure polyurea membrane" was applied, with an average thickness of 2 mm, continuously without overlaps or joints and completely adhered to the concrete. A general application was carried out on the entire surface of the concrete slab, and also in specific areas of encounter with perimeter walls, channelling, metal finishes or concrete boxes for the passage of installations. 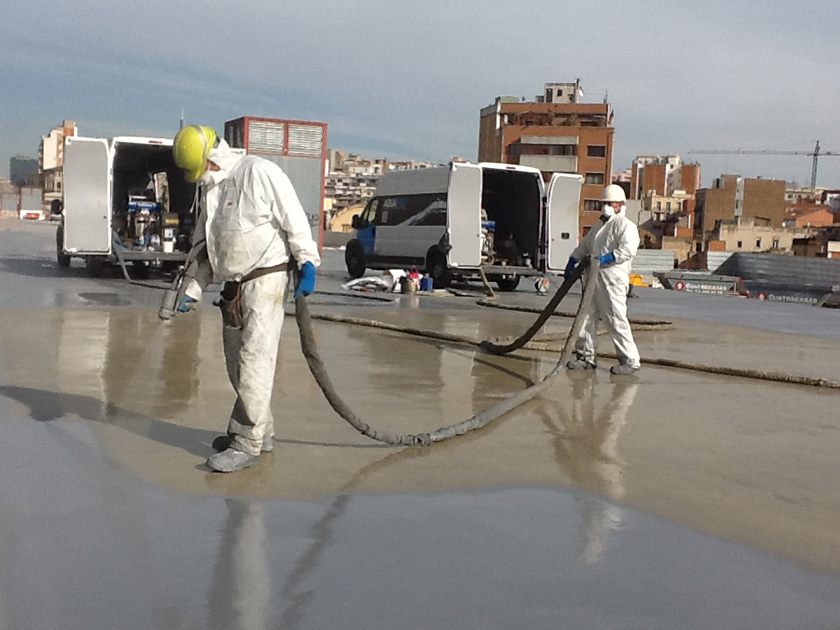 The membrane was completely covered by pavements and gardens, that is, without exposure to UV rays, and given the magnitude of the project, different finishes coexist: ceramic pavements, granites, mortars, children's play areas, gardens, etc.

Summarizing the advantages of the choice of this system highlight the direct and rapid application, drying in seconds that facilitates the application of large surfaces with high labor outputs, continuous training, without overlaps or joints, which reduces the possibility of seepage. Creation of a single, direct layer, with 100% safe waterproofing. Absence of mortar slopes for the evacuation of water (applied directly to the structural element which increases its adherence and protection against water ingress). Great resistance to abrasion, punching and rolling, which means that its passability during the execution of masonry works can be carried out without the need for protection by means of traditional concrete layers. Finally, it is a system with numerous certifications, approvals and tests worldwide (ETE, BBA, ASTM, ISO) which ensures and demonstrates its effectiveness; and its great versatility in many areas of work where it can be applied, both in terms of meteorology, construction methods or design and final use.