Throughout the past century, the line of train and metro tracks through the district of Sants (Barcelona) has been an open wound in its urban fabric, dividing the district into two virtually unconnected parts along an 800-metre section, from Plaza de Sants to calle Riera Blanca, creating the resulting urban dysfunctions in terms of acoustic pollution and deterioration of the surroundings. 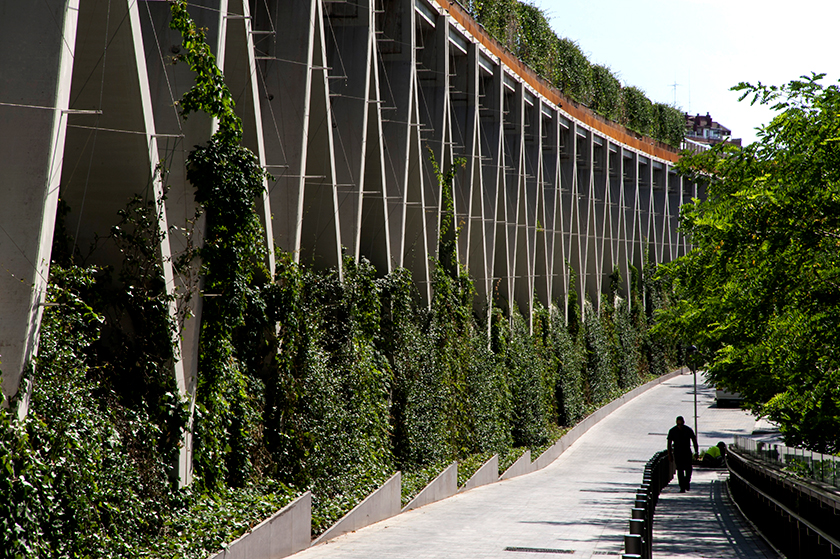 In the year 2002 the city’s administration decided to start up an urban renewal project for the Sants railway corridor. Having ruled out the option of putting it underground, it was decided to confine it inside a lightweight, transparent box for a good part of the section, with the roof being turned into an 800-metre-long raised and landscaped boulevard which would later be extended along the neighbouring municipalities as far as Cornellá, giving rise to a 5-km-long “green corridor”.

The structure that holds up the building/container is comprised of prefab concrete parts in a sequence on a diagonal which adopts the shape of a great Warren beam evoking the old railway bridges, leaving large empty triangles that lend themselves to glazing them over to allow a view of the train passing through the city, reducing its acoustic impact to a minimum. Not fully glazing the building allowed three great green inclines to be built which rise from the lowest levels right up to roof level. These embankments “anchor” the building into its setting, allow the roof vegetation to spill down to the lateral streets and support pedestrian ramps that provide a “natural” access to the roof.

The building’s roof dominates the surrounding streets in heights of between 4 and 12 metres and in consequence its gardens have been turned into a vantage point over the city. They start with a great umbraculum acting as a gateway into the gardens, which are structured along two linear routes: one in the north side of the roof, with a great deal of shade provided by the trees, and another one on the south side, which is permanently in sunlight. The intermediate space between the two routes is configured as the backbone of the gardens, based on the configuration of a complex artificial topography with high density of trees and rich plantings of shrubs and ground cover, chosen according to a highly selective colour palette. The elevations present in the topography, reinforced by the density and the strategic position of the tree groves, favour the creation of spaces in which the passers-by lose the feeling of being in a city and are immersed in a natural environment.

The most widely used types of trees are Tipuanas, Sophoras, Koelreuterias and Malus ‘Evereste’, characterised by their yellow and white flowers. The shrubs and ground cover have been distributed around the lawns, with Bulbine, red salvia, wild roses and Hedera Helix in the sunniest parts and Hedera Helix, Vinca, Gaura and Lantana in the more shaded areas.